Saturday morning Junior was at the groomer getting his hurr did and I had two hours to kill. I knew that if I stayed in town I’d end up living out one of several scenarios:

All of these scenarios ultimately end with tears…usually mine. I know because I’ve actually done all of them, with the exception of buying the wooden giraffes.

So, instead of subjecting myself to the clearly unmanageable temptations of downtown West Lebanon, N.H., I decided I’d drive up the hill and hang out at the airport. Not like, the inside of the airport where people are waiting around for flights (though that holds a certain appeal as well, though probably better done in larger airports where more than like six people are in there at any one time and people will get creeped out by the fat lady with no plane ticket doing cross-stitch in the corner for two whole hours), but rather out in the observation…area? Parking lot? Basically, it’s the back side of the airport. There’s a big chain-link fence to keep dingbats like me off the runways, but you can park up and watch the one or two planes an hour take off / land. There’s almost never anyone else up there, at least not in the winter, so I can sit in my car cackling at ‘Wait Wait Don’t Tell Me’ and doing my cross-stitch in relative peace.

When I got to the place I normally park up, there was a jet sitting just on the other side of the fence. It was a smallish jet, what I later learned was a Gulfstream 5. I learned that by, out of sheer random curiosity, punching the registration numbers emblazoned on the tail of the jet into Google. Not only was I able to find out what kind of plane it was, but I was able to see who it was registered to and, after a little dicking around, could actually find a cataloging of all the recent flights this plane had taken.

This is probably a good time to remind you that my run-away imagination is built for conspiracy theories. I wish it was built for like, writing enormously popular novels or screenplays because that would be way more lucrative and life-improving, but no. It’s pretty much all conspiracy theories all the time up in my ol’ cabeza.

So, when I was sitting there seeing all these details for the flights of this plane come up (on my PHONE, no less. We live in the future and it’s a magical place, people!), of course my brain was starting to rub its figurative little hands together, going “Yes, I can work with this. YESSSSSS.”  Pretty soon I was Googling the company that the plane was registered to (some kind of crazy hedge fund investment firm thing in Manhattan), and coming up with all kinds of far-fetched reasons why rich Manhattan-ite investment bankers would be flying a private plane to East Desolation, N.H. in the middle of January (which, trust me, is NOT the time you want to be here unless you’re a skier. Or a polar bear. And even then, your judgement is suspect). Everything from shady investment deals to covert extra-marital get-aways to a corporate team-building workshop (‘come survive the wilds of New Hampshire in the middle of January with nothing but the clothes on your back, a book of matches and three tins of Alpo’) bubbled up from the dregs of my imagination and it was altogether entertaining.

Later on when I got home and told Mark about my adventures in low-level phone-based Internet sleuthing, and questioned why all these people on Internet message boards would be talking about THIS SPECIFIC PLANE unless it was A VERY IMPORTANT PLANE, he totally burst my bubble. Turns out plane-spotting is a big hobby, just like train-spotting – people hang around airports and take note of the tail numbers of planes they see on the tarmac, then post the details on the Internet so that other people can “track” the planes. There’s even an app you can buy that lets you input the tail numbers and plot all the plane’s flights on a map.

So, fuck it. Next time I have to wait for the dog to get his hair cut, I’m totally buying myself a wooden giraffe. Maybe two. 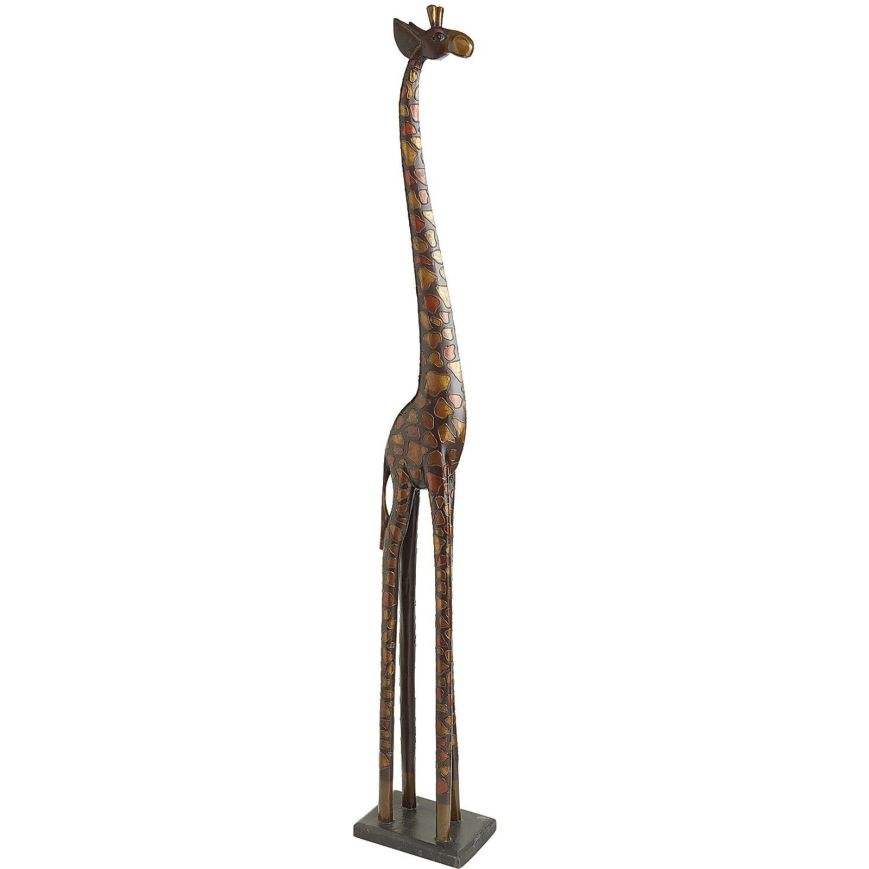 You cannot even fathom the dog-propelled chaos that would ensue if I brought this home. Junior would alternately try to hump it, chew on it, and refuse to come into the room where it resided, out of sheer terror. I need like…three.

4 thoughts on “sometimes a plane is just a plane”