Music has always been important to me. Neither of my parents played instruments, at least not in my lifetime, but they both liked listening to music so it was a common feature in my early life. My mom liked contemporary rock – Bryan Adams, Tina Turner, John Cougar Mellencamp. Saturday mornings were for cleaning the house, and dancing around to ‘What’s Love Got To Do With It’ got us through many a post-cartoon bout of dusting and putting away laundry. My dad was into older, harder stuff – Z.Z. Top, Blue Oyster Cult, Cream, Pink Floyd, old Aerosmith, Led Zeppelin. He also liked country though, so I was just as likely to be singing along to ‘Mama, He’s Crazy’ by the Judds rather than Led Zeppelin’s ‘Immigrant Song’ when I was with him.

When I was old enough to have my own little boombox as a kid, the first things I went for were pop – Michael Jackson (‘Bad’ was the very first tape I ever got) and Paula Abdul featured heavily – but I also started exploring a lot of my parents’ cassettes too. Albums like Aerosmith’s ‘Toys In The Attic’, The Grateful Dead’s ‘Shakedown Street’, and Billy Joel’s ‘An Innocent Man’, along with greatest hits compilations from Steppenwolf and The Beatles, all made it into my regular rotation. We didn’t have a lot of money so I couldn’t go out and buy new music very often, but it didn’t take me long to discover that time-honored 80’s tradition of taping music off the radio. I recorded the local rock station most often, as that’s what my little boom-box picked up with the best reception. This introduced me to such wonders as The Scorpions, Def Leppard, Van Halen, Bon Jovi, Guns ‘n Roses, and Metallica. By middle school I had a part-time job and a little pocket money, almost all of which was usually spent on music. Hip-hop was just starting to show up in the music stores up here around that time, and I embraced acts like MC Hammer, C+C Music Factory, and Digital Underground with the fervor only a newly minted teenager looking to set herself apart from the tastes of her parents’ generation can muster. High school ushered in my (predictable, in retrospect) transition to harder rock and goth music. I was obsessed with The Crow (again, predictable), and the soundtrack to that movie introduced me to groups like Nine Inch Nails, Stone Temple Pilots and Rage Against The Machine – all groups I still adore more than two decades on. When ADHD first reared its head and I started having trouble concentrating as a teenager, music helped considerably. Counting Crows’ ‘August and Everything After’ got me through many hours of homework, and the first short story I ever wrote was to an endless loop of Fleetwood Mac’s ‘Rhiannon’.

Today, I’m a grumpy middle-aged woman with a very boring day job. Alas, all those fantasies of becoming a musician didn’t pan out (not that I tried to make them, admittedly), but music is still a deeply important part of my day-to-day life. It has become my main coping strategy, not just in terms of dealing with my ADHD symptoms, but also my depression and anxiety. When I’m having a particularly anxious day, I’ll listen to a lot of Bow Thayer and Patrick Ross, wonderful local bluegrass / folk artists whose shows I’ve attended many times and who serve as anchors to the here-and-now for me. When I’m angry, I go for the catharsis of Rage Against The Machine, Incubus or Audioslave (I hope you found peace,Chris. You will be missed so much more than you could ever have imagined). If I need to power through piles of particularly boring data entry, I like the flow of older hip-hop and rap like A Tribe Called Quest, WuTang Clan, and The Beastie Boys, or the driving, trance-like beats of EDM.

If you have any favorite artists or playlists that help get you through the day, I’d love to hear about them. I use Spotify at work and enjoy exploring new music. I’ll listen to anything once! My main playlist, which is a super mixed up mess of everything from funk to metal to rap to comedy tracks, can be found here if you want to do some exploring of your own, or just want to listen along with me at work. 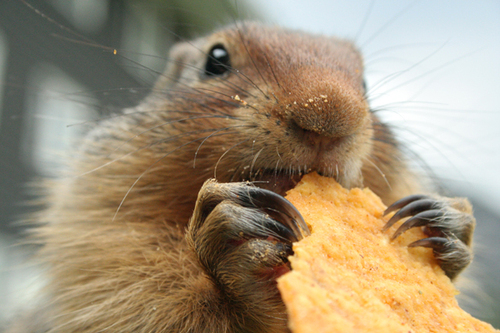 I’d claim this is a self-portrait, but my nails are nowhere near that long.