It’s hard to get started lately. Hard to start the day. Hard to start tasks other than ones I know that people would notice if I skipped. Hard to start making changes that would probably be helpful. I don’t know where to point myself or what words to use. The order of things gets scrambled and I wander off into dream-land rather than trying to untangle and clean up the messes I keep making.

I find myself wandering not just mentally but physically as well. Detours on routes I’m meant to be traveling. Wasting time and gas driving around looking for places I don’t need to go. I have no stake in these places. My brain is just always fishing for something to do other than what I really ought to be doing, and I don’t always have the ability to rein it back in, to stick to the path.

Part of this is down to my body adjusting to being (medically approved) off meds. Neither of the two meds I was on were working for me anymore – one was giving me panic attacks and the other one was making me wish I was dead (no planning, just the general ‘everyone would be better off without me’ feeling), in addition to causing some pretty serious gastric issues. So, over the course of the last few months, I’ve been working on getting off both meds. It will take some time for things to chemically settle back down in the brain meats, and I respect that.

Part of it is also big changes in routine. My partner found a job after almost six months of being unemployed. It’s a wonderful thing and I’m very happy about it, but it has also come with some scheduling turmoil for us and the hound. We’re still trying to get used to new time constraints, new traffic patterns, etc. Big changes aren’t easy for anybody, but when you’re someone who needs daily routines as anchors in order to not feel utterly untethered and overwhelmed, it’s particularly hard. There are things I can do to help with this, of course: stuff like giving myself a hard bedtime and wake time, doing meal prep on the weekends so that we have dinner stuff we can quickly throw together on weeknights, and making dog training time mandatory rather than optional (which is good for both him AND me). But, knowing what needs doing and actually doing it are often very different things in my world.

True to form, I don’t know where I was going with this and I don’t really know how to end it. I guess I just wanted to try and get back into the habit of writing even when there’s nothing really obvious to write about, because that’s supposedly how one becomes a better writer. Or something. 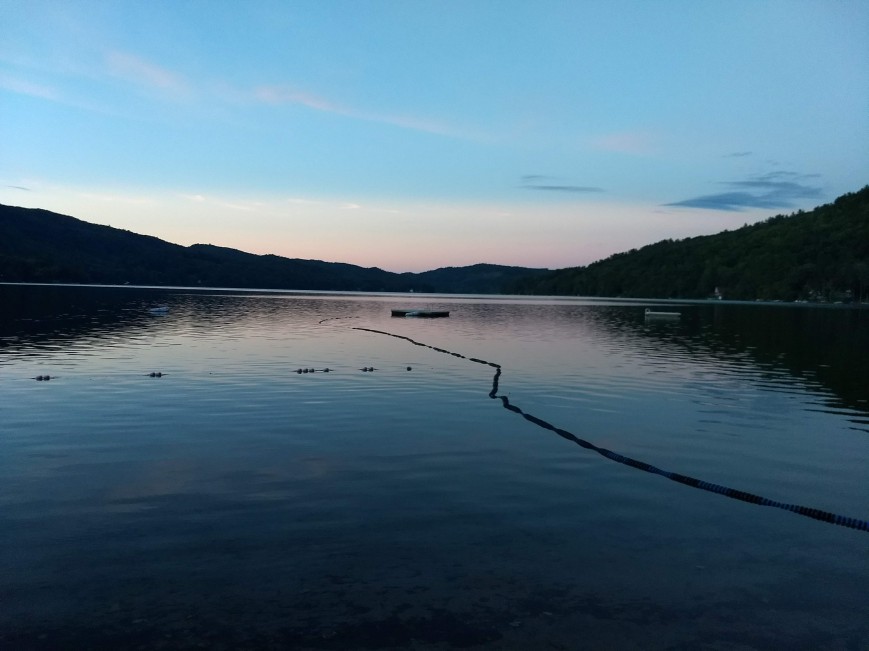 Sunset at the lake last Friday. I went to the store for ice cream and ended up at the town beach. At least I remembered I had ice cream in the car and didn’t stay long enough to let it melt.