This is my dog, Junior: 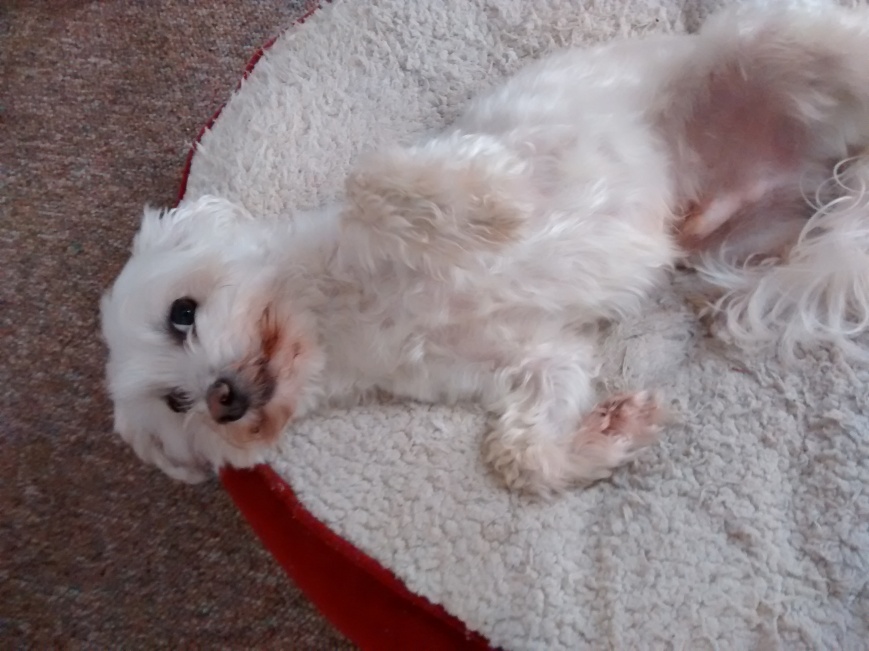 Don’t let that sweet innocent face and exposed belly fool you. This dog is a MONSTER.

Since I’ve started trying to get into this “do yoga in the mornings” habit, Junior has developed an accompanying new habit.  It’s actually a series of habits strung together into one ridiculous performance of dog fuckery the likes of which I feel few people could truly appreciate without video documentation, but I’m going to do my best to describe it to you.

Stage One (which honestly is the same basic Stage One that we had on non-yoga mornings):

Junior starts whining at about 6am.  Husband and I take turns alternately pulling blankets / pillow over our head for ten minutes at a time while the other one pets Junior and tries to soothe him back into another half hour of dozing.  It never works.

Sometimes there’s also a Stage One, Part B where-in I try to sing the song of Junior’s people back to him in an attempt to offend him so deeply that he fucks off and lets us sleep a while longer.  Again, never works.  It does have the residual bonus of being a minor husband trolling maneuver, though.  I mean, he’s never SAID he doesn’t like it…but I can infer.

Resigned to my fate of eternal sleep deprivation, I claw my way out of the tangle of sheets and feel around the bedside for my glasses like a developmentally challenged raccoon feeling for a dropped morsel of food.  Once glasses have been located and placed on my face, I pick up my phone and stumble from the bedroom to the bathroom.  I can usually get about five minutes of peace at this point before the whining starts up again, assuming I’ve had the presence of mind to actually shut the bathroom door.  If I haven’t, then there’s immediate whining and, far more disconcertingly, disappointed staring.  We’re still talking about the dog at this point, by the way.  Husband knows better than to follow me into the can first thing in the morning…or ever, really.

After the whining has once again reached Emergency Alert System proportions, I abandon the bathroom and stomp downstairs.  It should be noted that Junior isn’t actually whining this way because of any deep and desperate need to go outside, by the way – he’s literally just being an attention-whoring tit.  Also, this may be your first sign that my choosing not to procreate was probably the right decision.  Anyway – Stage Three culminates in me rolling out the yoga mat on the living room floor and firing up my favorite yoga video on the laptop.

Stage Four, AKA: The Pre-Trolling Warm-Up:

The pre-trolling warm-up begins with me laying down on the yoga mat to begin the practice.  While I’m on the floor trying to like, harness my chi or find my center or whatever, Junior is busy looking out the living room windows, scanning for neighbors, neighbor cats, chipmunks, birds, swirling leaves…really anything that moves in any way.  Once he inevitably spots a target, he unleashes a tirade of the shrillest yaps imaginable.  To his credit, the yaps are usually interspersed with some pretty amazing tiny-angry-Wookie noises which I do find amusing, but generally this stage ends with me picking up the nearest dog toy and chucking it at him to try and shut him up.  There are usually grumbles coming from the husband upstairs at this point as well.

Stage Five, AKA: Full On Trolling, AKA: Shit Gets Real:

Shortly after I run out of dog toy bark deterrents to chuck at Junior, Stage Five goes into full swing.  Because, you see, my dog does nothing by half measures.  Just barking and whining while I’m trying to better myself via the ancient art of yoga is simply not enough for him.  He will at this point bound off to another part of the living room where he stockpiles all of the stinky dirty socks that my husband peels off and gives to him at the end of every work day (hey, at least it’s not underpants?), and gleefully return with one of said stinky socks in his mouth.

Now, to be fair to Junior, we DO treat socks as dog toys in this house and always have, so he comes by the sock-fetching naturally enough and I have no problem with that.  However, when he takes the sock by one end, carefully orients the other end of the sock right next to my head and then proceeds to shake the ever-loving shit out of it in a manner such that it rapidly and repeatedly fwaps me DIRECTLY IN THE FACE…I tend to take that personally.

After the sock-face-fwapping, we proceed quickly to Stage Five, Part B, which is where Junior moves from above my head to somewhere near my hip and actually launches his entire 12 pound self directly into my solar plexus, quickly and effectively undoing any deep oxygenation, chi harnessing and/or muscle relaxation I have thus far accomplished.

Conveniently, this is just about when the yoga video wants me to stand up and start doing more painful movey-aroundy stuff anyway, and it’s also pretty much when my husband has finally started to wonder what the hell is going on down in the living room. He comes downstairs at this point, leashes Junior up and takes him out while I finish my yoga routine in relative peace. 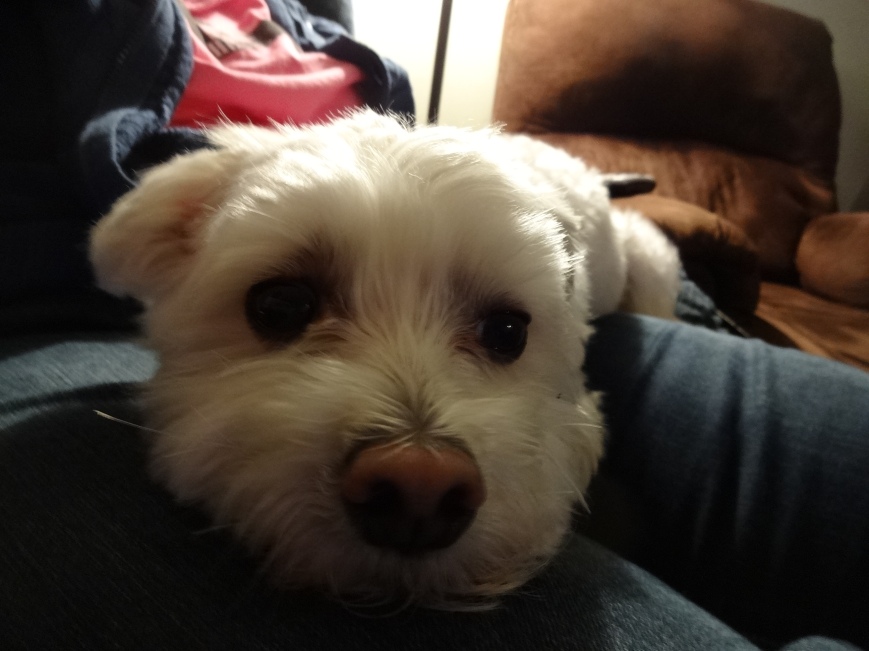 “Namaste? That roughly translates to ‘abuse mom with sock’, right? I mean, my accent may be a little off, but I’m pretty sure that’s what it means.”