So, the thing about brightly colored hair is, it bleeds. The darker colors especially have very large pigment molecules, lots of which don’t actually penetrate the hair shaft, but rather just sit on the cuticle (the surface of each hair) until they are eventually dislodged by washing or what have you. As a result, the first few showers I take after a dye job are pretty spectacular visually: mountains of purple suds when I shampoo, rivulets of purple water running across my skin, and swirls of purple circling the drain at my feet.

The color doesn’t just come off in the shower though. I try to wear my hair up for the first few nights after a fresh dye because otherwise I’ll end up with a disturbingly bruised-looking neck and shoulders: 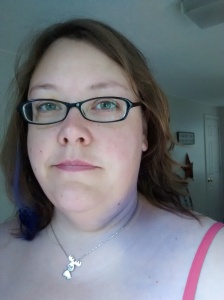 The purple really adds depth to my neck rolls, doesn’t it?

When the dye gets onto my skin like this, it’s quite hard to get off, even with soap. Almost like it’s, you know, MADE to stain. I’ve never had it transfer to my clothing or other surfaces from my skin, though – only ever from my hair itself.

Until today, anyway…when I stained the toilet seat blue at work.

Yes, that’s right, not only do I apparently have Smurf Ass, but it appears to be catching. Or at least, transferable to other surfaces, porous and non-porous alike.

I mean, I’m PRETTY sure the toilet seat wasn’t blue-ish before I sat down on it. It’s not like I was on it all that long or like my ass was especially sweaty while I WAS on it. But, when I stood up and looked down at the toilet, there was definitely a faint blue ass-print there.

All I can figure is that the sheer amount of extra dye being rinsed out of my hair this time stained my ass. I checked out my ass in the mirror after I noticed the toilet seat, but the lighting in the bathroom is terrible and who can actually twist around enough to see their whole ass anyway, you know? It maybe looked a LITTLE blue, but not like…”Jesus, what’s wrong with your ASS?” blue.

So I don’t know. Maybe the toilet seat really did have a weird faint blue butt-print on it before I got in there. Or maybe the cleaning ladies that come in this weekend are going to be SUPER confused.

This is my truest self.

Follow How Bad Can It Go? on WordPress.com
Join 1,074 other followers