(Scene: Mark holding the laptop toward me, dramatic music fading from the speakers as a trailer for The Great Wall ends on the screen)

Me: Sooo, instead of the Mongol hoards, they’re trying to say that the Great Wall was built to keep out…lizard monsters?

Mark: Kind of, yeah. Oooh, it was written by Max Brooks!

Me, not knowing who that is, but trying to be supportive: Oooh…?

Me: UGH. You know, I was thinking that the trailer had a lot of the same look as World War Z, but I didn’t say anything because I figured you’d pooh-pooh me.

Mark: I wouldn’t have pooh-pooh’ed you…

Me: I don’t think I need to watch a movie about Chinese lizard zombies, honestly.

Me, talking to the dog:  Junie, maybe we could get a lizard zombie and tie your leash to it and it could take you for shamble walks! YAY, SHAMBLE WALKS! Grrr! Aaaarrrrgggg!

Me: But that probably wouldn’t end well because we’d have no control over which way the lizard zombie shambled so you’d eventually have to call us from your little doggie cell phone, like ‘beep bop boop boop…hey guys, I’m in Thetford and I don’t know the way home. Can you come pick me up?’  Except, you’re a dog so I don’t think you’d even really know where Thetford was, so you’d be lost and we wouldn’t know where to come pick you up. Stupid lizard zombies!

Mark: Not only would he not know what town he was in, but how would he dial a cell phone with no thumbs?

Me: Well clearly it would be voice-activated. We’d pre-program the numbers for him.

Mark: So he could just dial by saying ‘beep bop boop’ like that?

Me, exasperated: I DON’T KNOW. Maybe it’s like, that simulated tone thing that hackers used to use to get on the Internet from pay phones.

Mark: Was that ever a thing? I don’t think that was a thing.

Me, going upstairs to bed: Eh, six of one, half dozen the other, really.

So the moral of that story is that you probably don’t want to try tying your dog to a Chinese lizard zombie for shuffle-walks because it will get lost and you won’t know where to go pick it up because APPARENTLY you can’t set cell phones up for dogs to voice-dial from, according to my husband.

Also, Hackers wasn’t a documentary, I guess?  I’m still pretty iffy on that one, honestly. 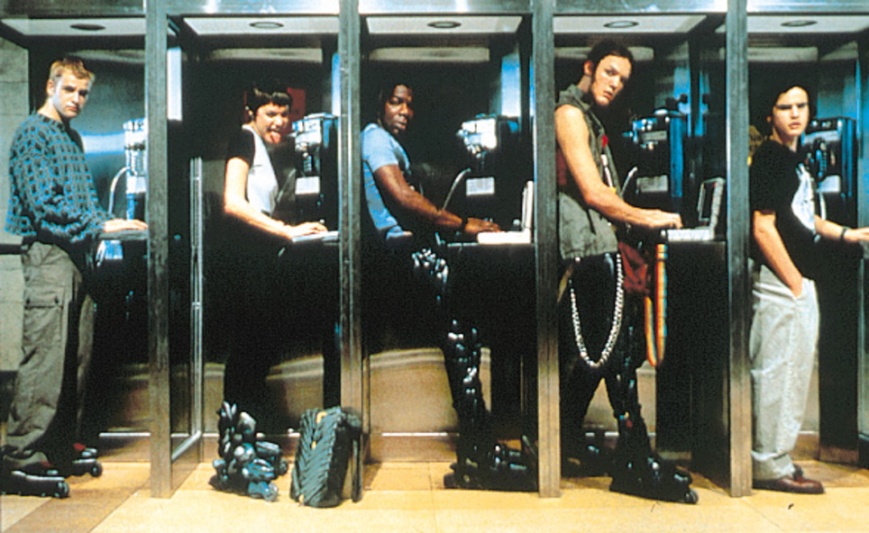 Very clearly using payphones to get on the Internet. I AM VINDICATED! Also, remember when Rollerblades were the amazing thing that all the L33T badasses wore? Me neither…