Most of what I do for work is pretty fucking boring. I look for numbers, I add or subtract some numbers from other numbers, I type numbers into various computer programs. Once in a great while it’ll get crazy up in here and I’ll have to do some very basic algebra (I don’t like those days, by the way – I failed algebra twice and I’m pretty sure the only reason I didn’t fail it a third time was because the teacher was really fucking sick of seeing my face at that point (and the feeling was mutual)). Sometimes I have to send emails to people about numbers. Occasionally there are meetings where I am asked questions about numbers.

If you’ve been around my blog long enough, you know that I also share an office with someone whose musical taste (and I use that phrase loosely) differs significantly from my own. That wouldn’t be a problem in the least, except that said person has also decided that, for whatever reason, he is entitled to listen to his music over speakers connected to his computer rather than listening via headphones like a civilized person. Historically, my way of dealing with this has been headphones of my own (TAKE A HINT, BRO) and a somewhat unhealthy obsession with about three dozen songs on Spotify. Several friends had suggested that I try podcasts or even audiobooks for times when I get sick of my Spotify playlists, but I never really gave either idea a chance. I’m an asshole like that sometimes. Probably not a newsflash to anyone.

During a probably-undeserved Twitter break one afternoon not long after we got back from GenCon, I noticed a link posted by one of my favorite authors, Pat Rothfuss. It was a link to a podcast called Unattended Consequences that he was doing with some guy named Max Temkin. There had been some amusing back-and-forth tweeting between the two during GenCon that I was really curious about the context of, and this podcast episode Pat was linking to was apparently explaining that whole thing. Intrigued, I decided to give it a go.

I knew via Twitter and Pat’s blog that he was interesting and amusing guy, but I had no idea who Max Temkin was. Turns out he’s one of the co-creators of Cards Against Humanity, and not surprisingly, also very funny. Add into the mix that I was still coming down from a great GenCon myself and therefore kind of pining for anything to keep the con glow alive just a little bit longer, and I was sold. I snickered and giggle-snorted my way through the rest of the afternoon feeling like I was hanging out with two nerdy friends and it was good.

The next day, like any mild obsessive worth their salt, I decided to go back to the beginning and work my way through all the episodes in order.  The podcast is often very funny, but it’s also interesting and insightful. They don’t just talk about gaming – they drop nuggets of writing advice (which, let’s face it, I need all the help I can get), they talk about books, philosophy, pop culture, and they’re both pretty upfront about their respective mental issues. I feel I can especially relate to Max, who routinely mentions his struggles with anxiety and the manifestations there-of (the unholy trinity of stress, procrastination and self-loathing with which I am so deeply familiar). Hearing talented, successful folks acknowledge mental struggles similar to my own is really helpful to me. I mean, it’s helpful when ANYONE is honest with their struggles because it helps to break down the stigma of mental illness, but for me personally, hearing someone like Max Temkin, Pat Rothfuss, Felicia Day or Jenny Lawson explain how their brains fuck them over on the regular makes me realize that success and mental illness are not mutually exclusive. You can have brain weasels and still make good art, do good things, and live a fulfilling life.

I’m almost caught up on Unattended Consequences now and I have to admit, the prospect of virtually hanging out with Pat and Max only once a week rather than almost every day is kind of a bummer. I’ll muddle through with other podcasts so that I don’t strangle my coworkers, but I don’t have to be happy about it.

Do you have any favorite podcasts? Do you do one of your own? Leave me a comment and we’ll chat podcasts. Or, find me on Twitter and we can talk about them there.

PS: This was a completely unsolicited and unpaid post. Pat Rothfuss and Max Temkin don’t know me from a hole in the ground. I just really enjoy their show and wanted to share it with others.

PPS: But if Pat Rothfuss and/or Max Temkin DID end up reading this and liking it, I’d probably shit my pants with excitement. Like, actual load in my actual pants. Actually.

PPPS: This post needs a picture. In honor of the discovery of possible new species of giraffes this week, here is a sassy giraffe. We should name him Gene. It’s a tongue joke. 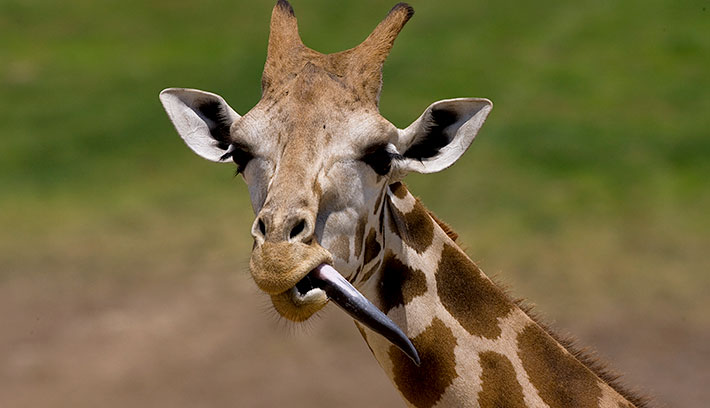 Did you think it was a fish hanging out of his mouth for half a second when you first saw it? I did, and it was VERY confusing.

PPPPS: What do you mean, ‘it’s obvious where the Adderall wore off during the writing of this post’?!  Ok, fair enough.

One thought on “My new favorite podcast, plus feels, plus a random giraffe. The end.”