This isn’t even relevant to what I wanted to talk about, by the way. It’s just something I was thinking about when I took the picture I’m going to show you shortly, and also I didn’t sleep well last night so filtering my thoughts is right out the (partially blocked) window at this point. Har har har.

This is my workspace:

None of that cutlery is currently clean. Don’t judge me. Also, I have no idea how my mouse pad got turned upside down. Weird.

Off to the extreme left of the picture, obscured by glare because I’m not a professional photographer and I was stealthily taking this picture while my boss was in the bathroom so I didn’t have time to re-position for 14 different shots, is a long, thin grey box called a network switch: 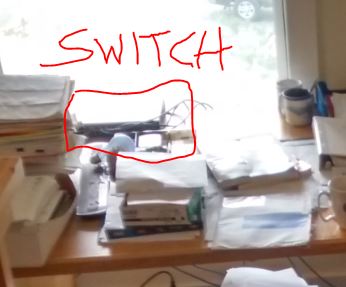 It looks like it’s written on the window in blood. Mwa-hahaha. Ew.

The switch has been sitting there shunting electrons hither and thither around the office for at least the five years that I’ve been sitting at this desk. Probably longer. It’s always a fucking production when the IT guy comes in to replace or fix things, so I’m pretty sure the advent of the switch being changed out would have stuck in my mind.

Which brings me back around to my actual story.

The switch in the picture is a new one because the old one started to sound like a helicopter touching down. The degradation wasn’t a sudden thing by any means. The switch had been exhibiting a normal-ish electronic hum for many months…years, even. It would ramp up to more of a refrigerator-like hum when the weather got very warm, but it wasn’t really distracting. And that’s saying something, considering I am the QUEEN of getting distracted by noises. I can’t NOT hear every noise going on around me, especially at work…but the hum of the switch even on its loudest days was just kind of a wall of white noise off to my left and it didn’t bother me.

Fast forward to last week. We had a couple of warm days in a row, and on the third morning we came in to find that the hum of the switch had escalated to near air-conditioner levels. This thing is like four feet from me when I’m sitting at my desk and I started to get a little bit worried about it exploding or something. I don’t think they actually DO that, but still. Never hurts to fret, right? My boss walked in later that morning and asked where the noise was coming from. We pointed at the switch. He said he’d ask IT to change it out. We muttered about not holding our breaths and got back to work.

A week later, the IT guy showed up at my desk with a new switch and commenced with his usual over-dramatic explanation of what needed to be done, how much work it would be for him, how long we’d all be offline, and the general piss-poor state of all the electronics in the building (side-note: why do IT guys do this? It’s effectively saying ‘I’m shit at my job’). I nodded and smiled, then fucked off downstairs to get a cup of coffee, leaving him to unplug cables from one box and plug them all into another.

Ten minutes later, I returned to my desk…and to a gaping maw of silence. The new switch made no sound at all. Not even the barest hum! It was CREEPY. I commented to my office-mate that the silence was making me feel off-balance, like something that I’d been leaning against on the left was now gone. He looked at me like I had two heads (which is his usual response when I open my mouth).

“Do you want me to turn my music up louder to compensate?” he asked.

“NO NO, that’s ok, I’ll get used to it”, I said, trying my best not to look panicked at the idea of having to hear any more of his music than strictly necessary.

And, to be fair, I WILL get used to it…but in the meantime, it’s totally weirding me out. I didn’t realize just how much I relied on that background noise until it was gone. Even when I’ve got my headphones in, I SWEAR can notice the lack of white noise off to the left. And on a day like today, when office-mate and his terrible music aren’t around, the quiet is like a black hole threatening to suck me in, break me down to atoms of the elements that make up my body, and spit me out the other side into an alternate universe where the Big Bang hasn’t happened yet and I might end up being part of a rock in several billion years. Or something.

Also, not having the white noise means I can now hear every fart, groan and trickle from the adjacent bathroom.

Nobody wins when you can hear the boss’s Metformin poops, trust me.