I made some cupcakes for work this week. They’re Valentines themed. Mostly it was all an excuse to teach myself how to make Swiss buttercream and play around with piping, if I’m honest. There was very little altruism toward my coworkers involved. It was more a case of “I will make these pretty things and give them to people, then enjoy them telling me how pretty they are”. And my therapist would tell me that there’s nothing inherently wrong with that motive, but admitting that was my motivation makes me feel like at least six different flavors of Awful Human Being.
But I digress.
So I made these cupcakes. Aren’t they pretty? 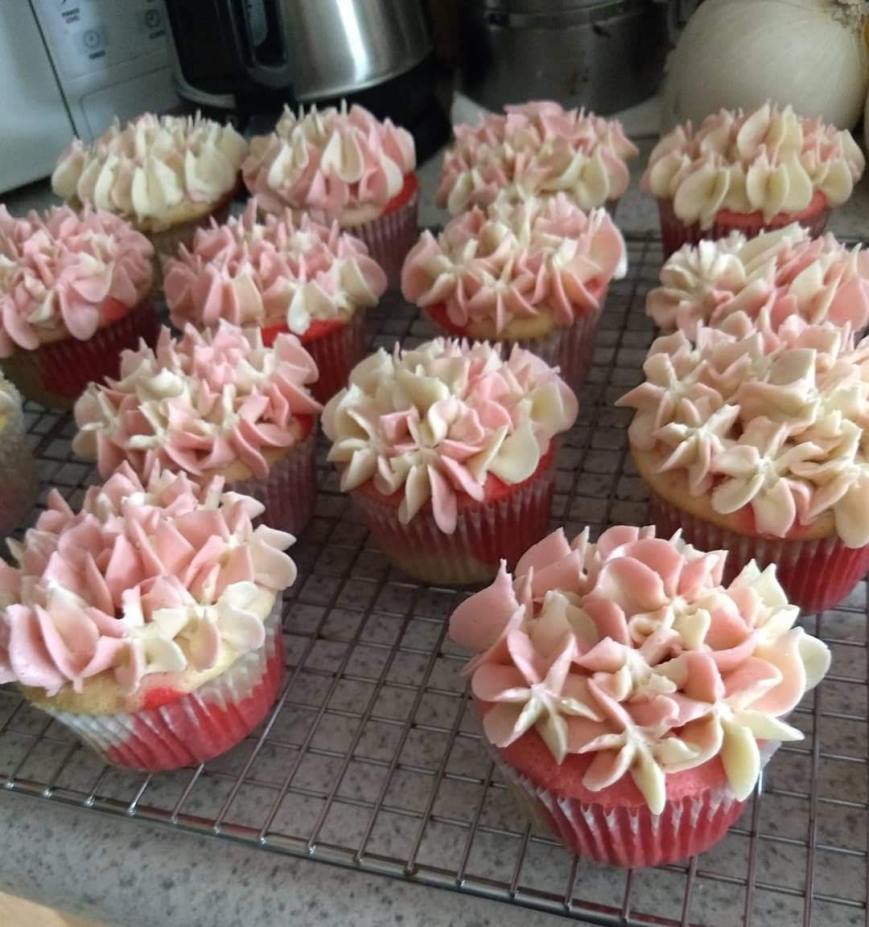 You can’t see it so well in the picture but the actual cake part is colored – it has swirls of white, pink and red. In order to get a true red cake batter, I had to use A LOT of red food coloring. The pink in the cake is pretty bright so that used a fair amount as well. There was only a little bit in the frosting, but still…all told, definitely a lot of artificial coloring going on.
One of the core tenets of baking is that you should check the finished product for poison by eating some of whatever you made. I mean, you don’t HAVE to, I guess…but then how would you know if your coworkers are actually enjoying the baked goods or just choking them down to be polite? Short of taking Susan aside and asking her if she was really being sincere when she said your buttercream was delicious, you have no way of knowing. So it’s a good idea to test the finished product and KNOW that it’s delicious, no matter what face Susan makes when she bites into it.
Point being, I ran a BUNCH of tests on the finished cupcakes yesterday, which means I consumed rather a large amount of red food dye.
You may be starting to suspect where this is going and you’re right, but stay with me. You might as well, you’ve come this far.
This morning my poop was predictably quite pink. Most food dyes end up turning your dookie green, but red stays pretty red through digestion. This is exactly why, when you prep for a colonoscopy, they tell you not to have anything with red food coloring in it for a few days before the test. The inside of your colon can get stained by the food dye and then the doctors have a hard time figuring out if the redness is due to disease or just somebody being overzealous about, say, eating Valentines cupcakes.
ANYWHO.
I have this one coworker who really likes baked goods. Honestly, she just likes free food in general, but she REALLY likes baked goods and has been known to consume quite a lot of whatever anybody brings in. Which, zero judgement here, but when she and another coworker were in my office and she was motoring through her second cupcake and talking about getting a third, it occurred to me that she probably didn’t realize just how much food dye was in them.
So of course I brought it up. Because that’s a reasonable thing to talk with your coworkers about, right? I mean, she engaged instead of running away or saying anything along the lines of “hey let’s not talk about poop”, so I don’t feel like I can be FULLY blamed. I may have also brought up the fact that you can make your poop sparkle by eating lots of edible food glitter (a theory I have tested and proven). It’s not like it was a completely unrelated subject at that point, after all.
One coworker, the cupcake fiend, thought it was pretty fantastic and vowed to go buy some edible food glitter to impress her kid and husband with in the near future.
The other coworker, who had been not exactly inching away but definitely leaning slowly further and further out the office door toward the hallway for the whole conversation, wore a look somewhere between bemusement and resignation as she examined her now empty cupcake wrapper.
I have a feeling she probably didn’t go back for seconds.
Oh well. Can’t win ’em all.

One thought on “shine on”

Follow How Bad Can It Go? on WordPress.com
Join 1,065 other subscribers