Prompt for Nov 6th: What was your biggest fear as a child? Do you still have it today? If it went away, when did your feelings changes?

We had this set of Time-Life books called “Mysteries of the Unknown” when I was a kid.

I think they were actually something that I ordered off an infomercial at one point and then my parents were stuck paying for it.  I did that…uhh…more than once when I was a kid.  *shifty look* 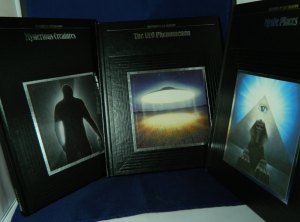 Anyway.  These books were actually really interesting, at least to seven or eight year old me.  There was one about Mystic Places, like the Bermuda Triangle and Stongehenge.  There was one about psychic powers, ESP, astral projection and the like – that one was my favorite.  There was one about mythological monsters, one about mind over matter, etc.  There were a whole bunch of them (although I just looked the set up and there were 33 total but we definitely only had like six or eight so apparently my parents wised up and got the subscription cancelled sooner rather than later.  Bummer.  I had no idea I was missing out so much!), including one about aliens and UFOs, which fucking PETRIFIED me…

…but of course I read it…

…and was promptly reduced to a total mess who couldn’t sleep without the light on for months (because aliens can only get you when it’s dark, duh…).  It got to the point where I actually had to hide that book on myself because even seeing it on the bookshelf when I was going for one of the other ones would freak me out.  If the book was out of sight, I could stop thinking aliens were coming to get me and maaaaaybe sleep at night.

At least, until the afternoon my parents put Close Encounters of the Third Kind on the T.V. and then both fell asleep.  I was probably 9 or 10 at the time.  I was so engrossed in the story (because really, it IS a good movie) that I couldn’t really make myself turn it off once I realized they were asleep even though it was scaring me.  That was good for another few months of needing to sleep with a light on right there.

So, as you can see, I already had an excellent base of alien phobia built up over the course of several years by the time the movie Fire In The Sky came out and my mom talked me into watching it with her.  And then…you guessed it…fell asleep.

If you’ve seen Fire In The Sky, you have a pretty good idea of why this was An Issue for me.  If you haven’t, well, take my word for it, it’s FUCKING DISTURBING.  To make matters worse, they made a huge deal about it being based on a true story.  I was probably 14 when I watched it and I was pretty into horror movies at the time – stuff like Poltergeist, The Omen, Friday the 13th – if it was creepy and bloody, my friend Christina and I were ALL ABOUT it.  So it’s not like I was just an all-around wimp about creepy stuff – it really was just alien stuff that truly bothered me.  Fire In The Sky, in particular, is a movie that I still can’t even think about without getting the willies even 20+ years later.  Even looking it up on Wikipedia so I could link you to it just made my brain weasels go into overdrive for a few minutes.  Ugh!

I’m not really sure quite when I started getting over the alien phobia.  It was still pretty strong circa 2002 when Signs came out because I flat-out refused to go see it with a couple different groups of friends even though they said it was really good and assured me that there was very little actual alien content.  Some time after that it started to slowly ease up, though.  I still get kind of creeped out at the idea of human-like aliens, particularly the ones with the big heads and almond-shaped black eyes, but I don’t have a panic attack every time I see a weird light in the sky like I used to and I don’t (generally) have to sleep with the light on anymore.

The thing is, I believe.  I believe even more today than I did as a kid that there has to be SOME kind of other intelligent life zooming around the Universe.  It feels incredibly arrogant to think otherwise.  And not only to I believe, but I find the idea truly fascinating.

So long as no one tries to beam me up.
You hear that, aliens?  I AM NOT VOLUNTEERING!