Prompt for Thursday Nov 5th: What is the most important lesson you learned as a child, and who taught it to you?

The most important lesson I learned as a child was to be independent.  I had no siblings growing up and my parents worked a LOT, so independence was something I had to learn pretty early on.  I don’t want to make it sound like I was abandoned or anything because that wasn’t the case, but I was pretty mature as a child, (which came to a screeching halt at about age 15, as you have probably noticed), so my parents trusted me to stay out of trouble when I was alone or when my mom was asleep.  Mom worked nights so she was usually just getting home and going to bed when I was leaving to catch the bus in the morning and would still be asleep for an hour or so after I got home in the afternoon, and my dad was often gone at work from 6 or 7am until 5 or after in the evening.

Independence wasn’t just about being able to feed myself and not burn the house down, though.  My mom indirectly taught me about financial independence by balancing her checkbook at the kitchen table every week.  I understand now that she was probably doing it because money was really tight and she was trying to find a few extra bucks here or there for things we needed, but as a child what I saw was mom sitting there managing HER money, paying HER bills, taking care of HER business.  That had a pretty profound effect on me.  I learned to balance a checkbook when I was 16 and it’s still a habit that, 20 years later, I don’t feel right if I’m not doing at least every other week.

Technically, I got my first job at 13 years old, but I worked for my dad on weekends and time off school from about the time I could push a broom and pick up sheetrock scraps.  My dad taught me to be independent by showing me how to do something and then leaving me alone to do it…and giving me hell if I did it half-assed.  He wasn’t afraid to let me fail and learn from the failure.  I was never Daddy’s Little Princess.  I was Daddy’s Helper.  I was the holder of wrenches, the finder of sockets, the cleaner of paint brushes, the mixer of joint compound, the stacker of wood.  It taught me that there’s no such thing as “men’s work” and “women’s work” – there is only work that needs to be done and if your hands are the closest, they’ll do just fine no matter your gender.

When I got older, my parents taught me independence by not giving me money or things that I wanted and instead making me get (and keep!) jobs.  Some of my friends had parents who paid them an allowance for doing chores around the house, or just bought them things that they wanted when they asked.  I had chores I was expected to do because it was helping out, and if I wanted money I had to get a job.  This taught me not to look to rely on other people for things I wanted but rather to go out and earn them myself.

Now that I’m in my mid 30’s (I’m holding onto the “mid” until I’m 38 and a half and you can’t make me do otherwise!), the independence that my parents instilled in me helps me not be afraid to think for myself and do my own thing.  I have some pretty eclectic beliefs and interests and the older I get, the less I care what anybody thinks about them.  I don’t necessarily PREFER to be alone, but I’m not AFRAID to be alone, so I’m not obligated to try and please others just for the sake of keeping them around.  The older I get, the more I realize just how valuable that trait really is, at the very least in terms of self-preservation. 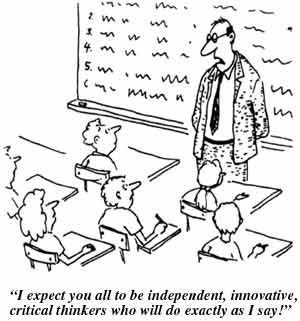 Follow How Bad Can It Go? on WordPress.com
Join 1,065 other subscribers