There are certain things I do on Sundays.

I grocery shop on Sundays, because that’s when the week’s flyer goes into effect.  I like to go early before the godly post-church crowds clog up the aisles.  It’s less about the fact that they all just came from church and more about the fact that I don’t like seething masses of humanity.

Sundays are laundry day, too.  I’m capable of doing laundry other days of the week but frankly, why wash today what you can put off until Sunday?  I have a carefully curated supply of clean clothes (all laid out on the spare room bed, in fact!), that will last me the whole work week without needing to do laundry so long as nothing, uhhh, untoward happens.  Like random pants-shitting.  Which I’m NOT in the habit of doing currently, I feel it necessary to point out.

Sunday also involves trying to appease our tiny white overlord, Junior.  As much as I would love for him to be, Junior is not work-dog material.  The last time I tried to take him to work with me on a weekday when the office was fully staffed, he peed on my office-mate’s chair leg, barked incessantly any time someone came up or down the stairs adjacent to my office, and growled at my boss.  So, Junior stays home instead of coming to work with me.  It probably breaks my heart more than it breaks his, but none the less, Sunday is the day I usually try to make it up to him ahead of having to leave him home alone for 40 more hours in the coming week.

As far as appeasement goes, Junior is generally a pretty simple overlord to work for:

He wants walkies, during which he will exert his authority over the world at large by peeing on any upright structures he encounters and barking at the neighbor cats.

He wants bites of whatever anyone eats, especially if it’s almond butter.

He wants a warm lap to curl up in if he so chooses, but he will be neither forced nor cajoled into cuddling, no sir!

He wants a car ride of appropriate length (none of that “once round the driveway” nonsense he used to settle for as a puppy), and there will be bonus virgins for you in Heaven if the ride happens to be punctuated by a visit to Nana’s house. 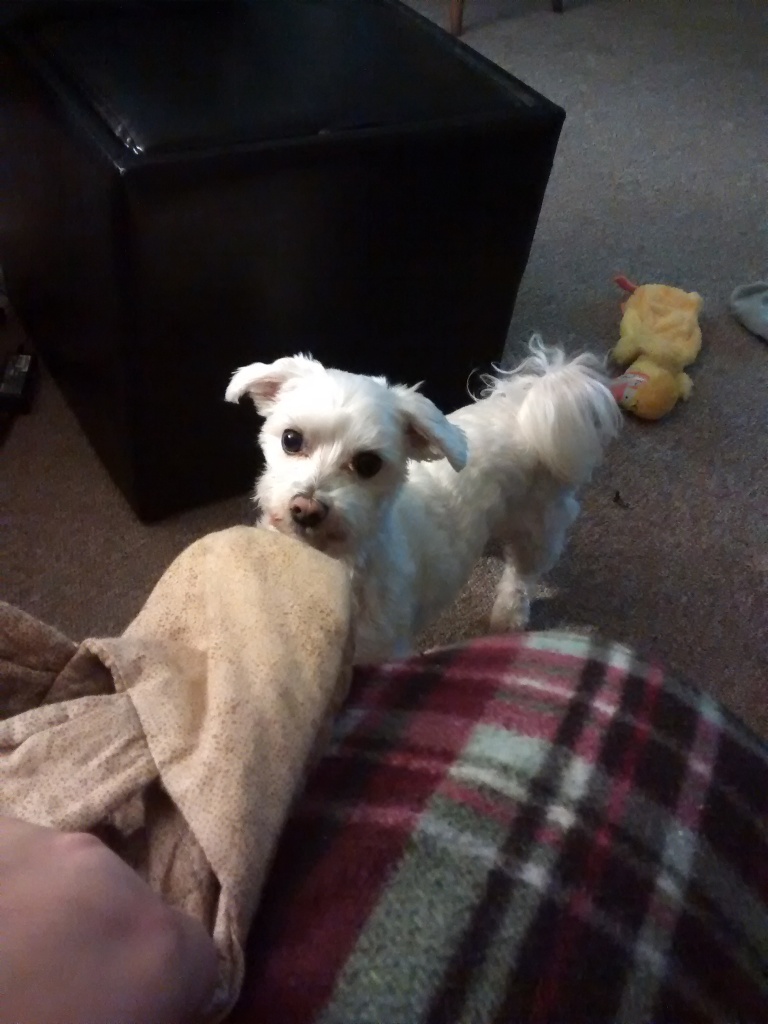 “Look, if you’re not going to throw it, then at least put your hand in it and wiggle it around enticingly.” (That’s what she said)