The other day I had to pick up a prescription. When I got to the pharmacy, I opted for the drive-through prescription pick-up window, because why the hell would you get out of the car if you don’t have to, am I right? MURICA!

I pulled around the corner of the building toward the pick-up window and chortled with glee because there was no one waiting in line. What luck! I reached into my bag to grab my wallet while I waited for the friendly face of the drug-dispensing angel to appear in the big plate-glass window. Something felt a little off about the car as I was rooting through my bag, so I glanced up and realized that the ‘off’ feeling was, in fact, the car continuing to move after I had come to a stop.

“OH SHIT. I guess I’m not in Park”, I yelped as I hit the brakes.  I put the car in reverse and backed up until I was even with the window again, just in time to see the tech behind the window losing her shit laughing at me. Apparently I had been loud enough to hear over the little speaker that lets them talk to the outside world.

With a cheerful smile, I commenced to explain to her how I had pulled up and forgotten to put the car in park while I was looking for my wallet. You know, despite the fact that she clearly saw the entire performance, heard me yell, etc.

Because I am THAT woman. The one that is not only impossibly awkward to begin with, but that also then feels she needs to explain the awkwardness (awkwardly, no doubt) to the observing parties. Then, to marinate a little longer in the extra awkward sauce, I write about these experiences on the Internet. Awkwardly.  And I’m OK with that nowadays. Well, more OK with it than I was as a kid, at least. Being awkward used to feel like the worst, most unbearable, most embarrassing thing ever. Now it’s a lot easier to take it in stride, to tell myself: “you could be a LOT worse things than weird. Like, you could be a serial killer. Or a puppy kicker. Or, OMG, a flat-Earth-er. An evolution denier! OK, stop, you’re getting yourself all wound up. Think of otters…”.

In the eternal words of Maurice Moss: 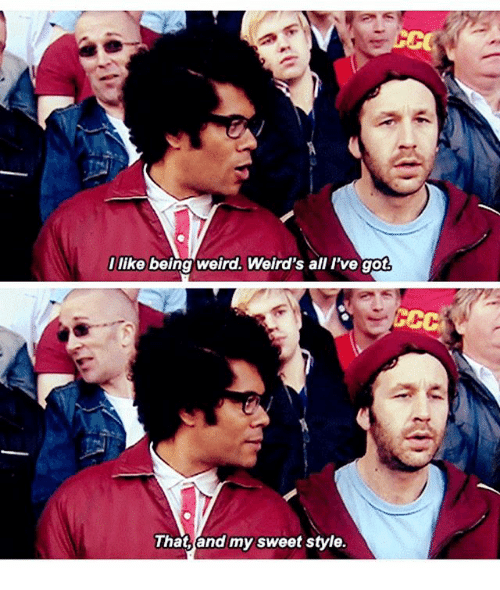