I was eating a cheese stick as I rolled up to the stop sign. I saw the NH State Police cruiser sitting there across from the little general store. It was pointed in my direction.
Setting the remains of the cheese stick aside so as not to look like I was driving distracted, I made extra sure to come to a complete stop at the sign. I even announced it out loud to the cruiser as I did so…because, honestly, it’s kind of an occasion. I’m queen of the rolling stop.
Smug with satisfaction regarding my (admittedly somewhat selective and opportunistic) ability to follow rules, I then looked both ways and proceeded through the intersection. I picked my cheese stick back up and took another bite.
Onward, to glory!
Force of habit made me flick my eyes up to the rear view mirror just in time to see the cruiser slowly pull out from its parking spot, headed in the opposite direction as me. I was mentally wishing the officer happy holidays when I saw the cruiser’s blinker turn on. The car executed a wide turn around in the parking lot of the store it had been parked across from and started traveling south, the same as me.
A second later, the blue lights started. The cheese stick was set aside once more.
I put my blinker on, pulled over…
…and immediately remembered that my car registration is like four months out of date.
“FUCK.”
Visions of large traffic tickets danced in my head. A slurry of coffee and cheap convenience store cheese bubbled threateningly in my tensing stomach. My pre-holiday festive mood was ebbing fast as the officer made his way to my window.
“Good morning ma’am. I’m Officer Whosiface from the New Hampshire State Police. Do you know why I stopped you this morning?”
“I’m sorry, Officer, I don’t.”  It wasn’t a lie. I knew damn well I had come to a complete stop at the sign because I made such a big deal out of it. What the hell else could I have done that would merit being pulled over? Surely it couldn’t have been the cheese stick.
“I stopped you because you failed to use your turn signal at the stop sign back there. Even when there are no other cars around, we need to use our turn signals for safety. Can I have your license and registration, please?”
Fucking turn signals! He saw that I’m from Vermont. Didn’t he know that the unofficial state motto of Vermont is “we don’t need no stinkin’ blinkers”? I decided not to bring it up, especially considering I was about to get spanked for having an out of date registration.
I handed over my license, went to grab the registration card from the center console…and came up empty. Shuffling through the CD’s and detritus in the little tray area underneath my stereo, I came up empty again. Well, super. No registration is even worse than an out of date registration! I was probably going to spend Christmas in jail. The cheese slurry menaced in my guts again.
“Sir, I’m so sorry, but I can’t seem to locate my registration at the moment.”
I braced for impact.
“That’s alright, I should be able to pull it up in my computer. It’s in your name, and registered to this address on your license?”
“It is.”
“And what year is the car, ma’am?”
“It’s a 2012.”
“Ok, I’ll be right back.”
He headed back toward the cruiser. I slumped dejectedly in my seat, picked up my phone and took a picture of the blue lights in my mirror, and looked at Facebook for a minute. Realizing it might not look great for me to be brandishing my cell phone when the officer came back, I set it down on the passenger seat next to the half-eaten cheese stick.
A few minutes later the officer returned and handed me back my license. There was no paperwork in his hand. I dared to dream the impossible dream: that I might in fact NOT be getting a ticket.
“Alright, I’m just issuing you a verbal warning today for failure to use your turn signal and for failure to produce your registration, ma’am. Again, please make sure you’re signalling any time you make a turn, even if there are no other cars around. And it would be a good idea to find your registration card as well.”
“Of course, sir. Thank you, sir. I will, sir. Blinkers, all the blinkers, sir.”
He handed my license back to me. I thanked him six more times than was necessary and wished him a Merry Christmas as he headed back to his car. I made extra sure to use my turn signal when easing back out into traffic, and looked up into the rear view again just in time to see him pull another wide turn in someone’s driveway and head back north.
I never did finish the cheese stick. 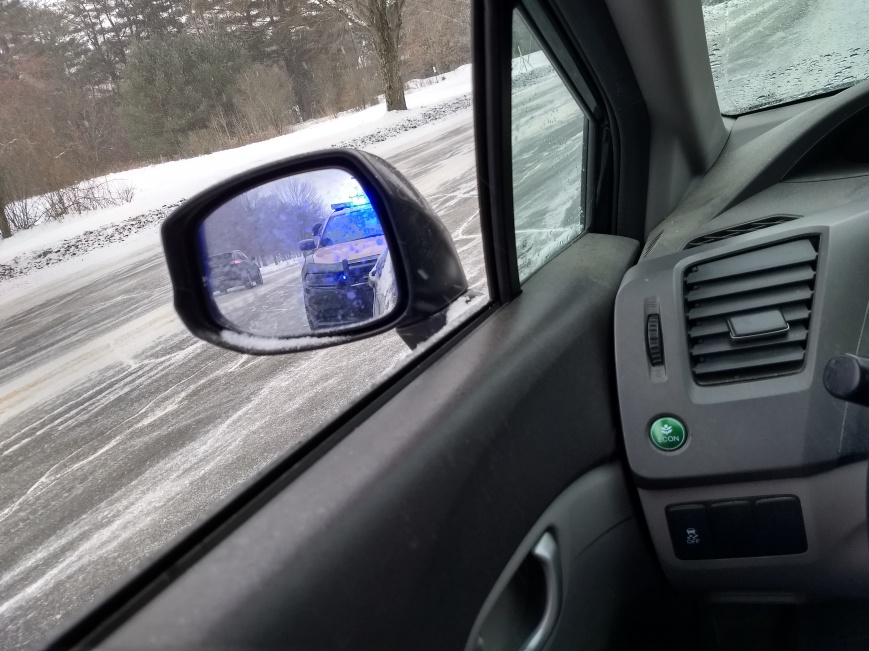 If filthy dashboards were a crime, I’d be public enemy number one.